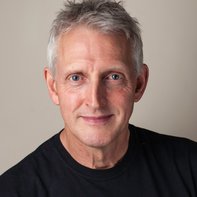 Steve trained for three years at the East 15 Acting school and has had an extensive career working in theatre, television, film, commercials and voice over.
Highlights include playing the title role in Hiawatha for the National Theatre, several years in Rep as an original member of the ‘Cut To The Chase’ actor / musician company at the Queen’s Theatre, Hornchurch (where he performed for and met the Queen!!), starring in a comedy series for the BBC alongside the legendary Richard Briers, appearing in Willy Russel’s ‘Blood Brothers’ in London’s West End, featuring in no less than 2 banned TV commercials (ask him in the bar…) and playing a murdering transvestite in the, soon to be released, Chinese horror / thriller movie ‘Susu’.
Shortly after ‘Journey’s End’ completes it’s run here in Belgium, he is straight into rehearsals playing Fleshcreep in ‘Jack and the Beanstalk’ in Croydon, UK.